Starr's on Broadway  is a full length play for the stage, that set out to change the world, but will settle for the title of definitive social satire on the most ludicrous political events in this country’s history.

Whether or not anyone still wants to hear about Monica Lewinsky and Kenneth Starr is debatable, but I think this piece touches on a lot more than that.  Using the Clinton story as a focal point, this play comically debates Vietnam, blacklisting, nuclear weapons, the Kennedy assassination, Watergate, free speech and numerous other perpetually topical and controversial issues.

Why was Kenneth Starr permitted to write a six hundred report about fluid drenched cigars, disguise it as vital information and put it on every bookshelf, television station and internet browser, so that school children of all ages would have free and easy access to it?   Not forty years ago, Lenny Bruce was repeatedly arrested for delivering much less explicit monologues, that he called comedy, to audiences of seasoned adults who knew what they were paying to see.  Why was a brilliant, caring and devoted man like Bill Clinton impeached for lying about something that almost every sexually active man or woman on this planet has twisted the truth about, at one time or another?  Previous twentieth century presidents did everything from escalating wars for their own personal gains to setting off nuclear bombs in cities that were filled with families.  Why was the biased and politically motivated Starr, who was not elected, but appointed, by the most right wing Republicans in congress, given free reign to break as many constitutional rules as he cared to, imprison people who hadn’t been convicted of crimes and destroy innocent lives at his own discretion?  And how many of the world’s homeless and hungry children could have been sheltered and well fed, with the hundreds of millions of taxpayer dollars that Kenneth Starr and his associates spent to find out that the president was guilty of nothing more serious than having a dozen little ten minute flings?

I think it was the great film director, Billy Wilder, who said that in order to tell people the truth, you have to make them laugh.  However, at this cynical point in time, it's not easy to imagine that anyone is actually still listening.   I think all socially conscious writers believe that we can change the world, when we’re twenty, but question it as we age and jade.  Maybe things were different in Shakespeare’s day.  Doubtlessly, audiences walked out of Romeo and Juliet with new appreciation for their significant others, and left Richard III questioning the sanity of their kings and rulers.  Still, without mass communication, satellite dishes, or even basic vitaphone film, how much of the globe could even the most respected philosophers and writers of the sixteenth century actually have actually influenced?  Did native Americans living in what’s now called Alabama benefit from bits of wisdom like to thine own self be true?  Did residents of sixteenth century Pakistan ever get to examine phrases like to be or not to be?  Then again, if change does indeed begin at the local level, and if Shakespeare’s writings influenced the lives of a small block of European theatre patrons, then in some way, the effect must have been felt by the planet, as a whole.  Perhaps people like Henry Hyde and Orin Hatch were in power in sixteenth century Verona, and perhaps they inspired now classic statements like What a piece of work is man, how noble in reason!

The advent of film in the early part of the twentieth century, and television, several decades later, made it possible for an artist to convey a message to mass millions, in less time than it previously took to bake a pie.  Nevertheless, early movies and television programs were governed by such strict standards that social statements were seldom made and public opinion was rarely swayed about anything more important than hair styles and dance trends.  Once in a while,  films like All Quiet on the Western Front or Mrs. Miniver would sneak in and stab audiences in the heart, and occasionally a masterpiece like Sullivan’s Travels would disguise itself as a light comedy and leave people thinking about social change. And of course, the early days of television gave us the Army\McCarthy hearings, and caused the downfall of one of the most notorious demagogue’s in this country’s history.  However, even that was unintentional, and I truly believe that, if the networks had known what was going to transpire, they never would have allowed the hearings to air.

Though music and film had a major effect on public opinion, in the sixties, episodic television still seemed indifferent to social issues, and didn’t seem to care about influencing much more than our fantasies.  Didn’t all teenage boys long for Marcia Brady to move into the next room, and didn’t all men daydream about being stranded on an island with Tina Louise, or having Barbara Eden, in a harem outfit, ready to grant every wish and then disappear into a puff of smoke, after she served her purpose?

Of course, there was a brief moment, after television  progressed from Mayberry RFD to Mary Hartman Mary Hartman, but before the term politically correct had entered into our conversations.  In that  passing period that they called the seventies, and I do remember watching it go by, television comedy actually did have a major effect on people’s perceptions.

M*A*S*H* brought an anti-war and anti-military sentiment into American living rooms, every week, for eleven years, and had this sentiment conveyed by warm, endearing characters that became part of our lives.  Archie Bunker certainly changed the way people perceived bigots.  Whether we grew up in Wisconsin or in the heart of Brooklyn, USA, we’ve all heard terms like jigaboo or queer used by average people who we knew well.  All in the Family made us see that bigots and racists don’t necessarily dress in sheets and burn crosses; a lot of them are there in our schools, our work places, and even at our family gatherings.  Archie taught us not to just shrug these people off as background, but to consciously be aware of how wrong and how dangerous their attitudes are. 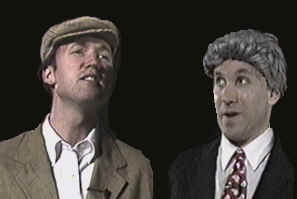 And then came Lorne Michaels.  The original Saturday Night Live didn't just change the world by creating a show that’s still going strong after over forty years, launched the careers of many of the most innovative comic minds of our time, opened doors for dozens of clones and imitators, and forever altered America’s perception of comedy. Lorne and his brilliant staff of writers and actors also overthrew a government, created a king from an unknown peanut farmer, and doubtlessly had a major effect on how the world has shaped, since the program's debut.  For a full year, before the 1976 presidential election, SNL showed the entire country, every week, that the incumbent president was a boob, that he was a klutz, that he was a total incompetent.  They constantly reminded people that this president was never elected, but was appointed by Richard Nixon, who himself was the most visibly corrupt president in history, and who was probably the least popular man in the country, at that particular moment.  At the same time, they portrayed Jimmy Carter, who many people knew nothing about, as suave, educated, hip and charismatic.  And, just so the American people would know that there was some truth to what they were saying, and that it wasn’t all just comic hype, SNL managed to coerce Gerald Ford himself into appearing on their program, and they succeeded in making him look like an idiot, when he was there.

There was no cable television, in 1976, no home computers, no nintendo, no video tapes, and people couldn’t even spend their time reading ramblings like this one, on the internet.  Saturday Night Live was the most popular new program in the country, everyone who was home and awake during it’s broadcasts had it tuned in, and Gerald Ford didn’t have a prayer.  If Ford had beaten Jimmy Carter, every presidential election after that would have had different contenders and different outcomes. Bill Clinton might still be in Arkansas, we might never have heard of Kenneth Starr or Monica Lewinsky, my play wouldn’t exist, and you’d be staring at a blank screen, right now.  And of course, if we'd had a different president in this country, things might not have changed the way they did, in Russia, and every other nation that we have any dealings with might be in a totally different place, right now.  So Lorne and friends, if you're reading this, you have my vote for creating the single most influential comedy program in the history of film, television and theatre. 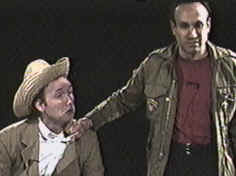 Today, there are so many home entertainment options other than watching network TV, that it’s hard to imagine that a single television comedy could affect the lives of the masses. I suppose that’s why most of the top network sitcoms seem much more concerned with quick laughs than socially significant plots.  So, how could a staged play, that couldn’t possibly be seen by more than a few thousand people in a given week, hope to make social statements that everyone will hear?  Especially when those statements have already been made?  Bill Clinton was not removed from office and Kenneth Starr is yesterday’s clown-like demagogue.

So what is Starr's on Broadway  about?  It’s about dead presidents advising living leaders, past atrocities matched against contemporary absurdities, and what I think the history books will record as the most ridiculous, hilariously funny and truly appalling events of the last millennium.  And how do I want the audiences to leave  the theatre?  Laughing at the context, perplexed by the absurdity, and determined never to let anything like this happen, again.

Thanks for taking the time to indulge my tangents.  Now, go listen to some audio clips, look at some more pictures, check out the rest of this website, and please grace us with your feedback.

(with small bits of editing through the subsequent years)

(totally unrelated to STARR'S ON BROADWAY)